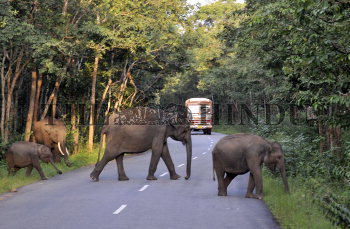 Caption : BANDIPUR FOREST REGION, 18/08/2009: TRAFFIC STOPPERS: Wild elephants cross a road on the Kerala-Karnataka border on August 18, 2009. The Karnataka government has banned vehicular movement through the area at night to protect wildlife. The ban in the Bandipur forest region, comprising Gundalpet-Bathery and Gundalpet-Gudalloor area, has forced the Kerala government and various trade bodies in the State to file a writ petition in the Karnataka High Court. Kerala is likely to move a special leave petition in the Supreme Court, following the decision of the Karnataka court to consider the case only in the first week of November. Photo: K. K. Mustafah