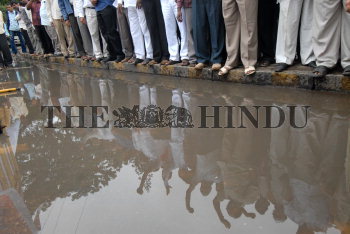 LARGE NUMBER OF BJP MEN ALONG WITH THEIR LEADERS S

Caption : BANGALORE, 17/08/2009: BJP PARTYMEN along with their leaders braving the rain and staging a protest demonstration near M.G. Statue in Bangalore on August 17, 2009, condemning the alleged JDS men attack on their leaders on August 16. Photo: K. Gopinathan