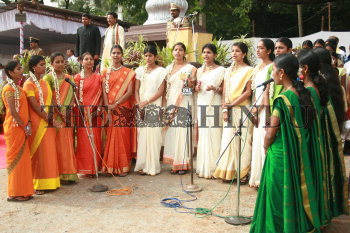 Caption : MANGALORE, 15/08/2009: (On the dais) District in-charge Minister Krishna J. Palemar (centre), Deputy Commissioner V. Ponnuraj and Superintendent of Police P. Subramanyeshwar Rao, listening to the 'Desa geethe', during the Independence Day celebrations at Nehru Stadium in Mangalore on August 15, 2009. is seen at the back. Photo: R. Eswarraj