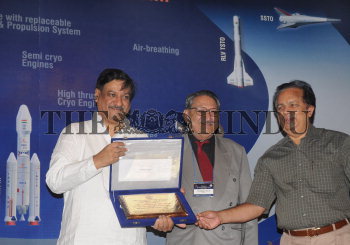 Caption : NEW DELHI, 12/08/2009: Prithviraj Chavan, Minister of State for Science and Technology and Earth Science, and G. Madhavan Nair, ISRO Chairman and Secretary DoS, presenting the Aryabhatta Award 2006 to Pramod P. Kale for his outstanding life time contribution in the field of Astronomy in India at the Astronautical Society of India Annual Awards 2006 function, in New Delhi on August 12, 2009 and twenty scientists honoured for their contributions in the different fields of Space Science including Rocket and Spacecraft related technology. Photo: Rajeev Bhatt