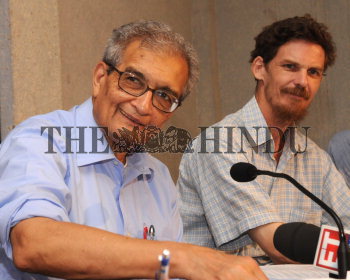 Caption : NEW DELHI, 08/08/2009: Nobel Laureate, Amartya Sen along with Jean Drčze, Indian development Economist of Belgian origin and honorary Professor at the Delhi School of Economics during a dialogue on " Right to Food Act" at Press Club of India, in New Delhi on August 08, 2009. Photo: V. Sudershan