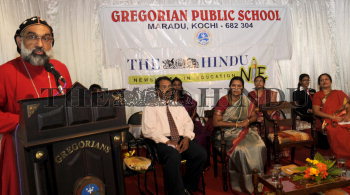 Caption : Kochi. Joseph Mar Gregorious, Synod Secretary of the Jacobite Syrian Christian Church and the mentor of the Gregorian Public School, delivering the presidential address at the Statewide launch of the The Hindu-NIE Programme held in the city on July 16, 2009. District Collector M. Beena, who inaugurated the programme, P. Narayanan, Regional General Manager of The Hindu, Kochi, and Jayaprabha Pradeep, the principal of theGregorian Public School, could also be seen. Photo:Vipin Chandran