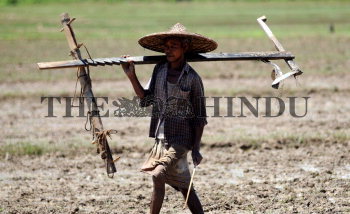 Caption : MORIGAON?15-07-2009 :(DROUGHT HIT IN 14 DISTRITS OF ASSAM DUE TO LESS RAIN FALL):A farmer on way to his agricultural field in the drought hit Morigaon district of Assam, about 100 km away from Guwahati on July 15, 2009. Despite drought hit situation, Assam government is unwilling to revive the dead irrigation projects in the state. In Assam majority of the irrigation project are lying unutilised due to massive corruption and miss management. The Assam government has declared more than half of the state - 14 out of 27 districts as drought-hit due to scanty monsoon rains. The relief and disaster management department has been put on an alert and officials asked to review the damage caused to agriculture due to the unusual dry climate. To fight the drought and minimise the woes of the farmers, the government decided on a series of measures, including opening up of nurseries for paddy plants, besides alternative irrigation facilities.The 14 districts declared drought-hit are Bongaigaon, Cachar, Dhubri, Goalpara, Golaghat, Hailakandi, Jorhat, Kamrup, Karbi Anglong, Kokrajhar, Lakhimpur, Morigaon, Nagaon, and Sivasagar. There has been a deficit of nearly 30 percent rainfall from the beginning of June to July 12 in Assam and the 14 districts received only 414.8 mm of rain in the period compared to an average rainfall of 588.8 mm. Because less rain fall this year the farmers of Assam are lagging behind one month of their actual agricultural scheduled time. Assam is primarily an agricultural state where more than 80percent people are dependent on agriculture. PHOTO: RITU_RAJ_KONWAR