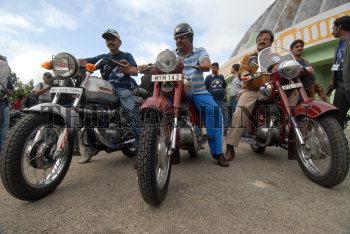 Caption : BANGALORE - 12/07/2009 : Members of The Jawa - Yezdi Club of Bangalore taking part in the 7th International Jawa - Yezdi Day rally, in Bangalore July 12, 2009. The rally being flagged off from Kanteerva Indoor Stadium to Chennapatna via Mysore Road for a distance of 70 kms. International Jawa - Yezdi Day, is an annual get-together & celebration of 175 & 250cc Jawa & Yezdi bikes, that were sold in India from the year 1950 till 1996. Originally from Czechoslovakia these bikes are known for their reliability and low maintenance costs. They were last manufactured at the Ideal Jawa factory in Mysore. More than 500 bikers took part in these annual event. Photo K Murali Kumar.