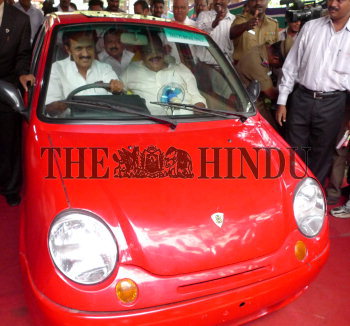 Caption : CHENNAI, 10/09/2009: A new driver: The Deputy Chief Minister, Mr M.K. Stalin, driving the prototype of a battery-operated car, named Bavina, at the Secretariat on July 10, 2009. Mr Stalin handed over to Mr S. RAJASEKAR, Chairman, Bavina Cars, the allotment letter for setting up a manufacturing facility on 100 acres in the Special Economic Zone in Ranipet. The plant will have an annual capacity of 25,000 cars and commercial production will commence from January 2011. Photo: V. Ganesan. Photo: V. Ganesan