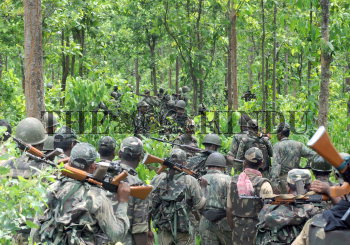 Caption : LALGARH,27/06/2009: Central and State Security forces are seen engaged in a combing operation in Ramgarh forest enroute to Lalgarh from Goaltore in Paschim Medinipur district of West Bengal on June 27, 2009. Starting from Kadashole in the morning today, a large contingent of forces reached Ramgarh and re-captured the police outpost by combating a poor resistance from Maoists. The extremist group used to have a strong hold in this seven-kilomtere stretch. Photo: Arunangsu Roy Chowdhury