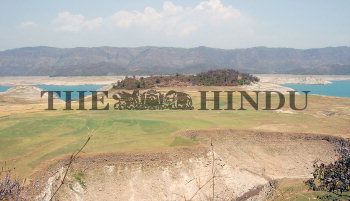 DELTAS HAVE COME OUT HERE AND THERE WITH THE WATE

Caption : UNA (HIMACHAL PRADESH), 24/06/2009: RAIN GOD?S FURY: Deltas have come out here and there with the water level dropped down to a new low in the catchments areas of Bhakhara Nangal reservoir near Raipur village of Una district in Himachal Pradesh on June 24, 2009. Release of water has been minimised from the reservoirs of Bhakhara Nangal dam as water level have dropped to a record low. With the rainless month of June so far has resulted into DRAINING out of the reservoirs at a period when water is very much in need for farming sector. Photo: Akhilesh Kumar