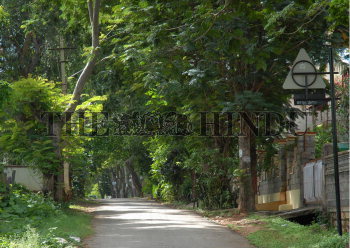 Caption : BANGALORE, 22/06/2009: Road full of trees at Rajarajeshwari Nagar, an area to the southwest of Bangalore. It is near to the Bangalore-Mysore Highway. A magnificent arch that marks the entrance to the area is visible from Mysore Road. The arch was built by the Rajarajeshwari Temple Trust and was inaugurated by former Prime Minister P. V. Narasimha Rao. Rajarajeshwari Nagar received its name from the famous Rajarajeshwari Nagar temple that is located just over one kilometer from the arch. The temple, which was built in the late 1960s, has Jnanakshi Shri Rajarajeshwari as its deity, and is maintained by the Kailasa Ashrama Trust. What was once a beautiful valley surrounded by hills and full of greenery, is today a bustling area with schools, colleges, and nursing homes. Rajarajeshwari Nagar is mainly divided into Ideal Homes Township, BEML Layout, BHEL Layout and Pattanagere. Now with the greater Bangalore formation, the governance is under BBMP (Bruhat Bangalore Mahanagara Palike). One immediately encounters the Ideal Homes Township upon entering Rajarajeshwari Nagar. It was formed by the Ideal Homes Society in the late 1970s, and today it is a prime property point in Bangalore. BEML layout is further ahead and is divided into five stages. It is comparatively larger than the rest of the areas in and around Rajarajeshwari Nagar, and contains many shopping complexes and hotels. Pattangere is also a beautiful area inside Rajarajeshwari Nagar, with an old look and feel to it. Rajarajeshwari Nagar, which was once considered to be far from Bangalore, is today one of the prime properties in Bangalore and is well connected by public buses. With as many as six engineering colleges (PES, RV, Ambedkar, GAT, RNSIT, JSSATE and SJBIT) within a short drive, and a Software Technology park (Global Village) along with Bangalore University Campus situated nearby. Photo: K. Murali Kumar