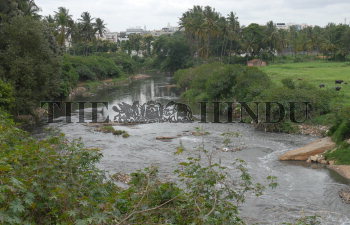 Caption : BANGALORE, 22/06/2009: Vrishabhavathi river, a tributary of the Arkavathy River, the erstwhile fresh water stream, today carrying huge quantities of industrial, agricultural and domestic effluents from the western part of Bangalore metropolis. On the Bangalore/ Mysore road, the Vrishabhavathi canal on the outskirts of Bangalore is a familiar sight. There is also a water treatment plant that was set up at great cost just before Kengeri, in Bangalore on June 22, 2009. Photo: K. Murali Kumar