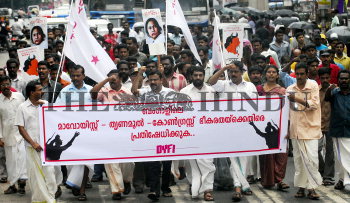 Caption : THIRUVANANTHAPURAM:18/06/2009:: DYFI activists march to the Secretariat in the city protesting against the attack on party functionaries by maoists at Bengal on June 19, 2009.........Photo:S_Mahinsha