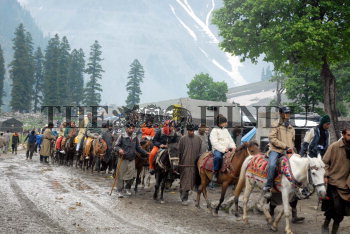 Caption : SRINAGAR, 16/06/2009: Pilgrims en route to Amarnath Cave at Domail Pass near Baltal during the annual Amarnath Yatra some 140 kms from Srinagar on 16 June 2009. More than 15,000 pilgrims who had reached the Baltal base camp in north Kashmir started their 14-km mountain trek towards the holy cave Tuesday morning. Heavy rains had lashed the yatra route and the rest of the Valley Monday. Amid shouts of "Bam Bam Bhole" and "Har Har Mahadev", the traditional cry hailing Hindu god Shiva, the first batch of pilgrims from various parts of the country. Photo: Nissar Ahmad