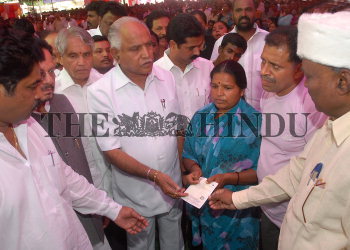 DEPARTMENT OF FOOD AND CIVIL SUPPLIES AND CONSUMER

Caption : BANGALORE, 10/06/2009 : Department of Food and Civil supplies and Consumer Affairs organised distribution of BPL ration cards for over 7000 families at Hebbal in Bangalore. Chief Minister B.S. Yeddyurappa along with his ministers, MP's and MLAs presented the cards to the public. Bharathi and Prakash, Parents of Six year old Abishek who was washed away are present to collect the Card. Photo: K. Gopinathan