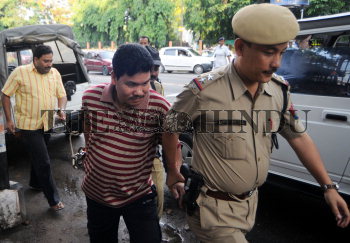 Caption : GUWAHATI06-06-2009: The North Cachar Hills Autonomous Council (NCHAC) chief executive member Mohit Hojai and his associates RH Khan (in left) being taken in remand by the National Investigation Agency (NIA) in Guwahati on June 06, 2009. The National Investigating Agency (NIA) has registered a case against the Chief Executive Member of NC Hills Autonomous Council Mohit Hojai following a petition filed by Mukesh Singh, Superintendent of Police, Ministry of Home Affairs, before the court of Chief Judicial Magistrate, Kamrup seeking ten daysâ custody of Hojai and his associates. The case (1/2009 NIA Act) was registered under the Arms Act identical to sections under which Hojai and his associates were booked by the City Police under Basistha Police Station in Guwahati (170/2009). Mohit Hojai was arrested for giving Rs 1 crore to DHD-J militant leaders for procuring arms. PHOTO: RITU_RAJ_KONWAR