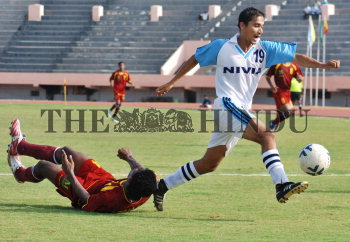 Caption : COIMBATORE, 31/05/2009: Maharashtra's SANTOSH Koli (19) in full flow even as Kerala's K.P. Zubair (on the ground) struggles to tackle his effort in the 63rd SANTOSH TROPHY National football championship at the Nehru Stadium in Coimbatore on May 31, 2009. Photo:M_Periasamy.(Digital)