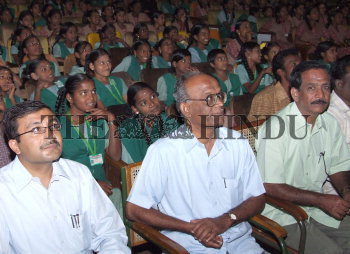 Caption : Ashish Vachhani, left, the District Collector, watching the opening film at the inauguration of the Children's Film Festival in Tiruchi on January 3, 2007. The Chief Educational Officer, R. Muthukrishnan, second from left, is also seen. Photo:R_Ashok