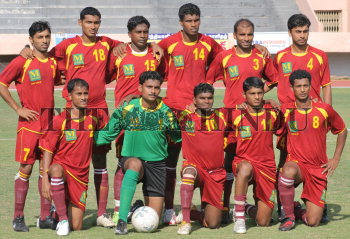 Caption : COIMBATORE, 28/05/2009: Kerala team pose for a photograph in the 63rd Santosh Trophy National football championship at the Nehru Stadium in Coimbatore on May 28, 2009. Photo:M_Periasamy.(Digital)