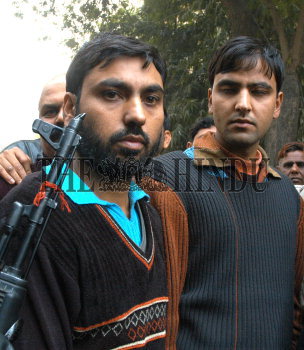 TWO TERRORISTS OF THE LASHKAR-E-TOIBA

Caption : NEW DELHI: Two suspected members of the Lashkar-e-Toiba, Ali Mohammad (left) and Samimullah being produced by the Special Cell of the Delhi Police in New Delhi on January 01, 2007. They were held at the New Delhi railway station. They planned to bomb a market in the capital. Photo : Shanker Chakravarty