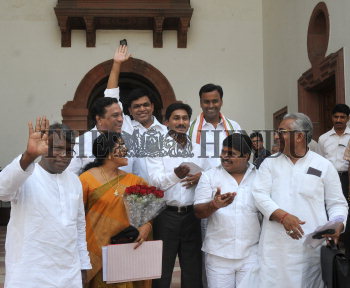 Caption : New Delhi, May 19, 2009 : Newly elected Congress Members of Parliament from Andhra Pradesh arrive to attending the Congress Parliamentary Party meeting to elect Dr. Manmohan Singh as their leader at the Central Hall of Parliament House in New Delhi on May 19, 2009. Photo by_Rajeev Bhatt.