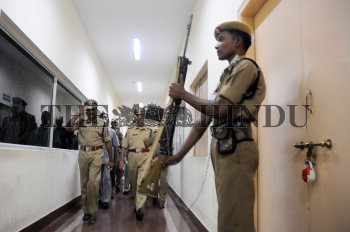 Caption : HYDERABAD,15/05/2009:An armed jawan GUARDING a sealed chamber where Electronic Voting Machines (EVM) are stored, salutes city police commissioner B. Prasada Rao as he along with other top officials walks past after review of final security arrangement at one of the votes counting centre in Hyderabad on May 15, 2009 a day before counting of votes which will be held tomorrow for the two Parliamentary and 15 Assembly constituencies in state capital. A three-tier barricading system has been arranged at counting station for a thorough security check-up before entering into the counting hall.. Photo: Mohammed Yousuf