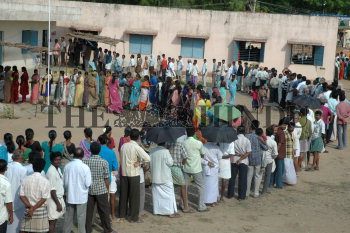 Caption : MADURAI,13/05/2009: LPeople waiting to exercise their franchise at a Government High School at Anaiyur under the Madurai Parliamentary constituency on May 13, 2009. According to reports, Tamil Nadu recorded an estimated 60 per cent polling. Photo: G. Moorthy