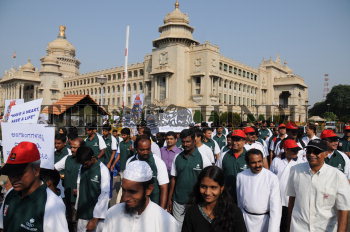 Caption : BANGALORE - 10/05/2009 : Large numbers of Sports personalities who represent the Karnataka State, Police officials, Film personalities, Students, Doctors from the transplant centres in Bangalore, and members of KOA, participating in the "Walk to save Lives; Donate Organs" organised by Karnataka Olympic Association (KOA), in Bangalore on May 10, 2009. The walk aimed to spread a message of 'Donate Oragans', started from Vidhana Soudha, was flagged by Lokayuta Justice Santosh Hegde. Photo: K Murali Kumar.