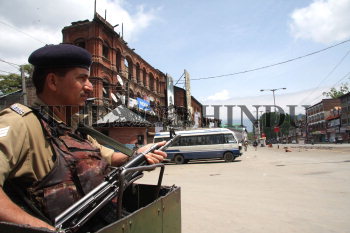 Caption : SRINAGAR, JAMMU AND KASHMIR, 06/05/2009: Police personnel stand guard at a security barricade during a strike in Srinagar on May 06, 2009. Troops patrolled deserted streets and erected barricades in Srinagar, sealing off residential areas to halt separatists' protests against general elections. Voting for Srinagar constituency is scheduled for May 7. Photo: Nissar Ahmad