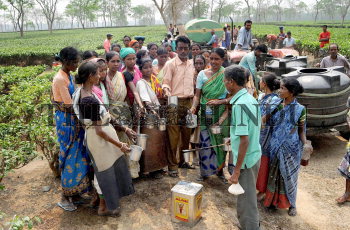 Caption : GUWAHATI—04-05-2009 Tea garden labourers take a break and enjoy tea in a tea garden in the outskirts of Guwahati city on Monday, May 04, 2009. After a long dry spell, the rain has finally arrived in Assam and other parts of northeast India. Assam state’s tea plantations were under severe moisture stress during the current season due to prolonged dry spell. This moisture stress is of ‘unprecedented magnitude’ in the recent period. Ideally, tea plantations should receive about 210mm of rainfall between November and March in the quantum of 20mm in November, 10mm in December, 15 mm in January, 65 mm in February and 100 mm in March. But, in the current season, the rainfall during this crucial period is infinitesimally low and the deficit has resulted in great moisture stress and this has adversely affected the growth of tea in Assam. Assam contributes over 50 % of India's total tea production of 900 million kg per year. The state has over 800 tea plantations. PHOTO: RITU_RAJ_KONWAR