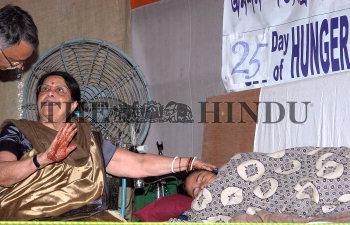 Caption : The grand-daughter of Mahatma Gandhi, Sumitra Kulkarni called on the Trinamul Congress leader Mamata Bannerjee, who has reached on her 25th day of hunger strike to protest against the proposed Tata Motors project at Singur in Kolkata on December 28, 2006. Photo: Arunangsu Roy Chowdhury