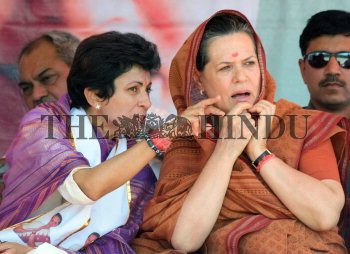 Caption : AMBALA (HARYANA), 30/04/2009: ELECTION SPECIAL: Congress partyās candidate Selja shows a section of crowd to party president Sonia Gandhi at an election rally at Ambala in Haryana on April 30, 2009. Polling for all ten seats of Haryana will take place in fourth phase of General Elections on 7th May. Photo: Akhilesh Kumar