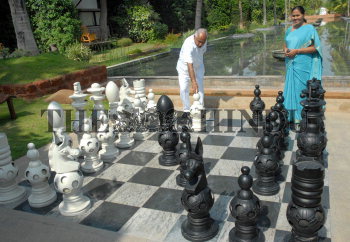 Caption : Chief Minister B S Yeddyurappa trying his hand on a game of chess at a resort in Mysore on Monday before leaving for the election campaign. Minister in-charge for Mysore district Shobha Karandlaje is seen. PHOTO: M.A. SRIRAM TO GO WITH MYSBRNS1.27