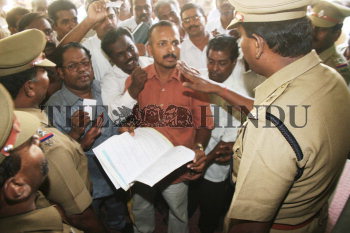 Caption : COIMBATORE 24/04/2009: PACIFYING AGITATORS: Police pacifying independent candidates and their supporters at the Collectorate after the authorities refused to accept nomination papers after 3 p.m. on April 24, 2009. Photo:S_Siva Saravanan