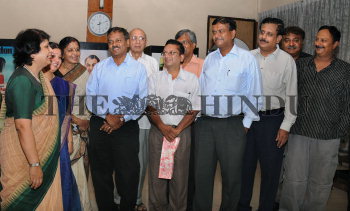 Caption : CHENNAI: 24/04/2009: Jayasri Ramachandran (extreme left), General Manager of Air India (Southern Region) with the judges of Rank and Bolt Awards, at the felicitation function to them, which was organised by Air India in Chennai on April 24, 2009. Photo: S_S_Kumar