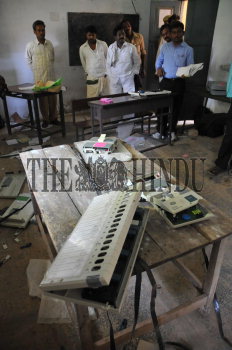 Caption : HYDERABAD--23-04-2009 -- The EVMs smashed by miscreants at Ravulapalle in Mydukur Mandal of Kadapa District during the second phase of polling on April 23, 2009. Photo: P_V_SIVAKUMAR