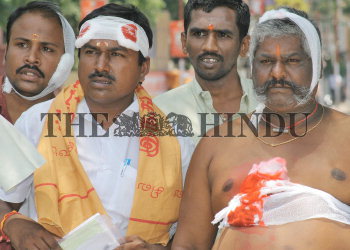 Caption : COIMBATORE 23/04/2009: Hindu Makkal Katchi (Thamizhagam)'s A. Annadurai (second left) along with his supporters arrives with bandages to the Collectorate to file his nomination as an independent candidate from the Coimbatore Lok Sabha constituency on April 23, 2009. This was to highlight the sufferings of the Sri Lankan Tamils, he said. Photo:K_Ananthan