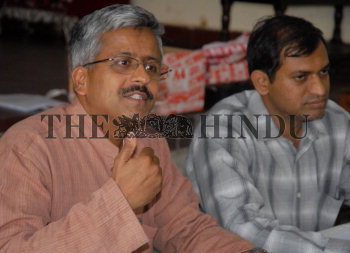 Caption : Dr R Balasubramaniam and Mr Sridhar of National Election Watch speaking after releasing a report ( on the financial and criminal backgrounds of candidates contesting the elections in the second phase in Karnataka) at Mysore April 22, 2009. PHOTO: M.A.SRIRAM