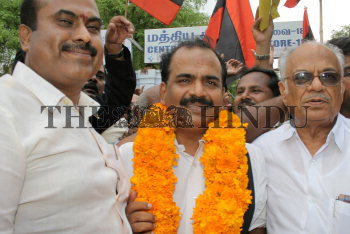 Caption : COIMBATORE 22/04/2009: Propaganda secretary of the MDMK Nanjil Sampath (centre) gets a warm reception from his partymen on his release from the Coimbatore Central Prison following the Madras High Court quashing his detention under the National Security Act on April 22, 2009. Photo:K_Ananthan.(Digital image)