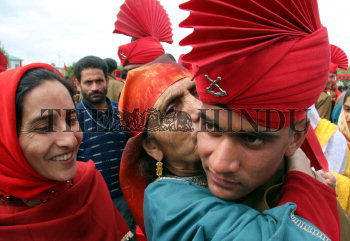 Caption : A Kashmiri cadet is kissed by a relative after he graduated as soldier at a passing out parade at an army base on the outskirts of Srinagar,on April 22, 2009. Some 414 recruits were formally inducted into the JKLIR after rigorous training. JKLIR is the youngest and the most decorated infantry regiment in the Indian Army.