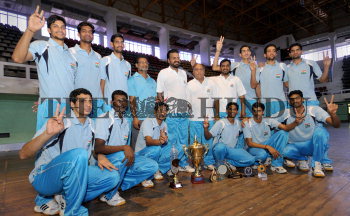 Caption : Visakhapatnam:20/04/2009: Indian youth boys volleyball team, which won the 25th international tournament "memorial Ferruccio Cornacchia" in Italy and later won bronze medal in the Poland international tournament at Stachin, pose with the trophies after its return to the ongoing camp for the World Youth boys championship, in Visakhapatnam on April 20, 2009.---Photo:K.R. Deepak