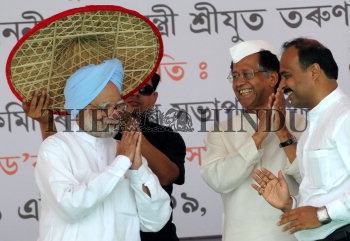 Caption : GUWAHATI 19-02-2009 : (PM MANMOHAN SINGH ADDRESSED ELECTION RALLY IN GUWAHATI) Prime Minister of India Dr.Manmohan Singh being welcomed with a traditional Assamese Japi by Assam Health Minister Hemanta Bishwa Sarma (in right) and Assam Chief Minister Tarun Gogoi during an election rally in Guwahati on Sunday, April 19, 2009. Prime Minister who is a Rajya Sabha MP from Assam will cast his vote in Guwahati on April 23rd during the second phase of Lok Sabha election. Campaigning for the second phase of Lok Sabha election is going on in full swing through out Assam state as both Manmohan Singh and BJPâs prime ministerial candidate LK Advani addressed election rallies in Assam today. The 15th Lok Sabha general elections will be in five phases from April 16 to May 13, 2009, where about 714 million voters will cast their votes. The results of the election will be announced in single phase on May 16, 2009. PHOTO: RITU_RAJ_KONWAR