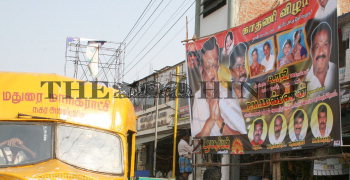 Caption : MADURAI, 17/04/2009 : A man pasting paper over the Dravida Munnetra Kazhagam symbol and the appeal to vote for "rising sun" in presence of Corporation officials on a hoarding put up at Arasadi on April 17, 2009. The Election Commission has banned any surrogate advertisements for political parties during election. Photo: K. Ganesan.