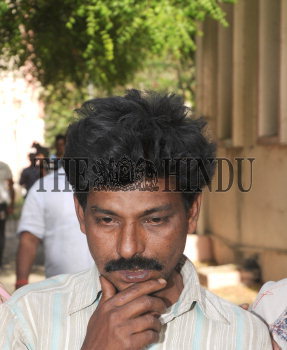 Caption : NEW DELHI, 17/04/2009 : Ayub Khan who lost his 11 years old daughter, being attended by police personnel in New Delhi on April 17, 2009. Shanno was studying in MCD Primary School, Narela and was punished by her teacher for not doing home works yesterday, she fell unconscious and after spending a day in hospital she died today morning. Photo : Rajeev Bhatt.