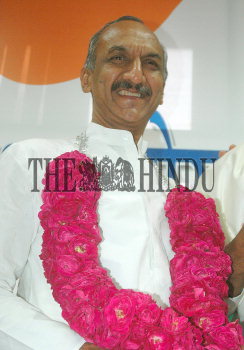 Caption : NEW DELHI,17/04/2009: DPCC president and Congress candiadte from North East Delhi J.P. Aggarwal who replased Jagdish Tytler after the latter was dropped in the wake of protests over his involvemnt in the 1984 anti Sikh roits, at a function DPCC office, in New Delhi on April 17, 2009. Photo:Sushil Kumar Verma