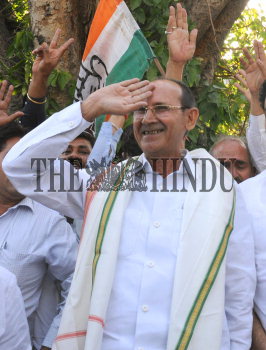 Caption : NEW DELHI,17/04/2009 : Ramesh Kumar who replaced his brother of Sajjan Kumar for the South Delhi Constituency after the latter was dropped in the wake of protests over his involvemnt in the 1984 anti Sikh roits, during media interaction, in New Delhi on April 17, 2009. Photo: V. Sudershan