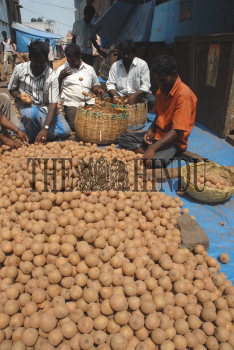 Caption : Bangalore/17/04/2009.......Heaps of Sapota (Chikku) which comes from the sorrounding areas of Bangalore and farmers gets few paise per sapota but mediaters sells this per 100 Sapota Rs 80 to 100 depends on size in Bangalore. Photo:----Sampath Kumar G P .