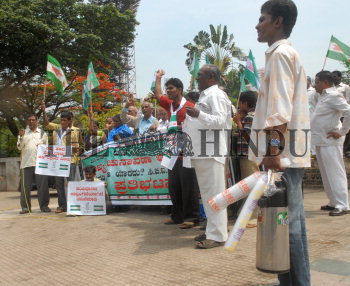 Caption : Bangalore 17/04/2009 : A Coffe tea seller waiting to get a custorme while Janata Dal (U) Karnataka members staged a protest demo before MG Statue in Bangalore on April 17, 2009. They were demanding the Chief Electoral Officer Karnataka to take action on those cash and kind were siezed so far. They also reminds the CEO that cash worth Rs.60 crores seized in the last Assembly election and there was no detection, prosecutiion and conviction in this unlawful activity. They were urging to refer all the cases of money seized so far in Karnataka to CBI for enquiry and prosecution. Photo: K.Gopinathan