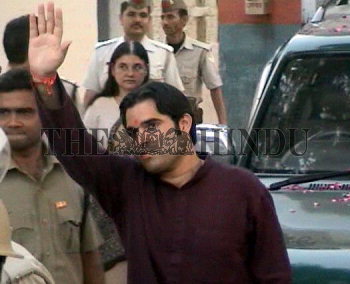 Caption : ETAH, UP, April 16, 2009: BJP candidate from Pilibhit, Varun Gandhi waves after being released from Etah Jail on the direction of Supreme court for two weeks, his mother Menaka Gandhi is also seen behind him on April 16, 2009. Photo: Rakesh Bhadauria