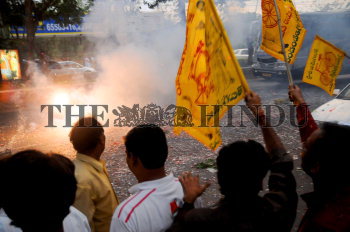 Caption : HYDERABAD,16/04/2009: Up- Beat mood perceive in four-party Grand Alliance led by the Telugu Desam Party activists who celebrated the partyās encouraging performance in the first phase of elections where balloting was held for 22 Lok Sabha and 154 assembly constituencies. The activists burst crackers and distributed sweets at NTR Trust Bhavan in Hyderabad. A moderate 60 to 65 percent polling recorded in which 31.2 million voters, half of them women, casted their votes, sealing the fate of 2,148 candidates - of whom 315 were for the Lok Sabha was recorded. Photo: Mohammed Yousuf