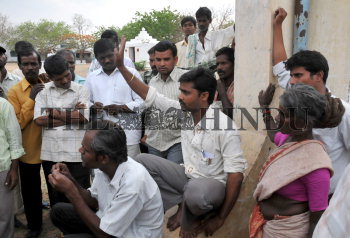 Caption : HYDERABAD,16/04/2009 --* POLLING IN MAHBUBNAGAR * (REPORT: M. RAJEEV) - They are not protesting voters outside a polling booth ! , but some of the Independent candidates who filed nominations as Pollepally SEZ victims, in Jadcherla Mandal of Mahbubnagar District in Andhra Pradesh, after polling was over in the village on April 16, 2009. Photo: P. V. Sivakumar