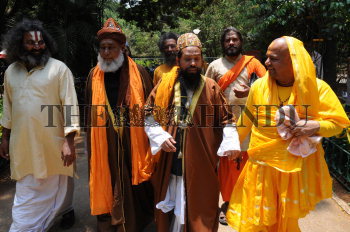 Caption : BANGALORE,16/04/2009 : Saints, Sages and Sufi Darveshes from across the country arriving to addressing a press conference at Press Club of Bangalore, during their 'Sanatan-Sant-Sufi Yatra', in Bangalore on April 16, 2009. After trips to Delhi, Bhopla, Hyderabad, Varanasi, Patna, Ranchi and Guwahati, the Sanatan-Sant-Sufi Yatra reached Bangalore city spreading the message brotherhood and peace, and caution against the politicians who make communally venomous speeches and disturb peace and tranquillity of the nation, and not to vote those who believe in dividing the country on the basis of religion. Photo: K Murali Kumar.