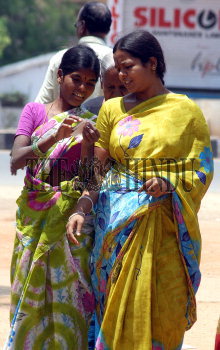 Caption : RAMANTHAPUR, MEDAK(AP):16/04/2009 (Election Special ) Foxed: Two women whose names did not figure in the voters' list coming out of the polling booth in Kamareddy on April 16, 2009. Photo: Nagara Gopal